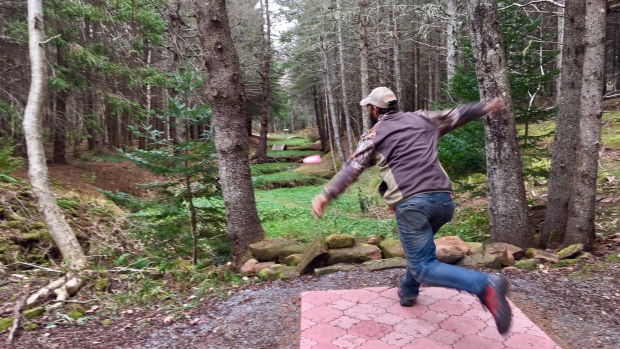 Hillcrest Farm Disc Golf is excited to announce that the course will take part in hosting the National Disc Golf Championships in P.E.I. Read more in excerpt below, from the full CBC News story.

By Brittany Spencer, CBC News for full article- see http://www.cbc.ca/news/canada/prince-edward-island/pei-disc-golf-championships-1.4406054 P.E.I. is well known for having some of the best golf courses in the country. Now, the province is gaining a reputation for having a top-ranked disc golf course. Ben Smith, president of the Maritime Disc Golf Association, launches a disc on the 11th hole at Hillcrest Farms in Bonshaw. (Tom Steepe/CBC)

The tournament will be held at the course at Hillcrest Farms in Bonshaw, P.E.I., which is ranked as one of the top 10 disc golf courses in North America. The Maritime Disc Golf Association (MDGA) will host the National Disc Golf Championship, on P.E.I. next year. “We’re beyond excited,” said Ben Smith, president of association. “This is has been a plan for the last three years.” Smith said the MDGA’s bid to host the tournament was well received and the event was given A-tier status, the highest status ever given to a tournament in Canada. “This course is an absolute gem, there’s no question about it,” Smith said. “It’s a treasure that’s found it’s way around the world here. We have more requests from players internationally to come and bookmark this course than any course that I have been a part of.” By Brittany Spencer, CBC News For full article- see http://www.cbc.ca/news/canada/prince-edward-island/pei-disc-golf-championships-1.4406054